The Jewish history of Amsterdam 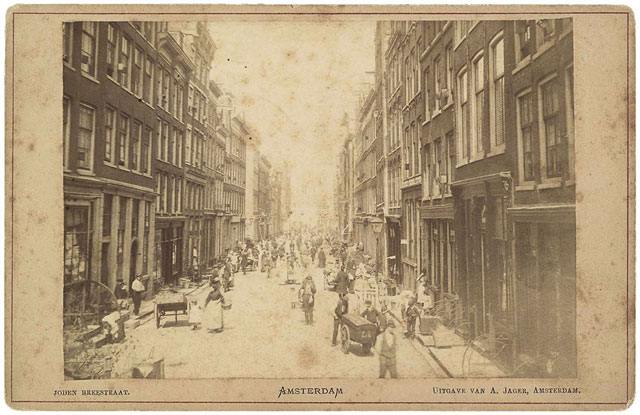 Amsterdam used to be a centre of Jewish life. This can be seen in the nickname ‘Mokum’. Many Amsterdammers do not realise this is a Yiddish1 word, used as a term of endearment for Amsterdam. The word means ‘place’, because they felt safe and at home here.
Since the end of the 16th century, Amsterdam has been a sanctuary for Jews from Spain and Portugal and from Central and Eastern Europe. In their home countries, they were persecuted. Amsterdam was the only place in Europe where Jews could live openly in freedom.
Around half of all Dutch Jews through the centuries lived in Amsterdam. The influence of Jewish life in Amsterdam is palpable right up until this day, not least because of the many Yiddish words used in Amsterdam’s slang, such as ‘de mazzel’(good luck), ’geinponem’ (joker) and ‘lef’ (courage).

In 1492, life had become unbearable for Jews in Spain. The Roman Catholic Church banned all other religions. Jews, and Muslims too, fled the country. Many Jews also fled from Portugal. In Portugal, the Inquisition was also given free rein to persecute non-Catholics. Some become baptised to avoid persecution. Nevertheless, many of them were burnt at the stake.
The first Jews to move to Amsterdam, are Portuguese traders: Sephardim2, fleeing the Inquisition3. The city council is interested in the trade they bring with them from the Portuguese colonies in South America. They quickly switch from trade with Portuguese colonies to trade with Dutch colonies like in the Caribbean and Suriname. During this era, Amsterdam grew into Europe’s most important port. The seventeenth century becomes the Dutch Golden Age.

In 1572, the seven northern provinces of the Netherlands revolt to rid themselves of Spanish rule. They proclaim themselves the Republic of the Seven United Netherlands. A few years later in 1579, they sign the Union of Utrecht. One of the constitutional rights in this political agreement is that all residents enjoy personal freedom of conscience. It is the first ever legal base for this human right in Europe. In practice, it means that the Catholic Church is banned, but Catholics cannot be persecuted. It also means that Portuguese and Spanish refugees, who fled to the country in around the 1600s can feel safe. They decide to return to their original religion and culture, Judaism.

Start of the practice of the Jewish religion

The year 1602 marks the official beginning of the practice of the Jewish religion. Rabbi Uri Ha Levi, who is appointed to return the immigrants back to Judaism, is arrested on suspicion of selling banned goods. He denies the charges, but admits “exercising his religion here in the Jewish way” – and is released. The first public synagogue is consecrated in 1639.

At the beginning of the 1600s, a small number of Jews from Central Europe moves to Amsterdam. In addition, more and more Jews come from Eastern Europe, who faced persecution and a lack of rights from the first half of the seventeenth century. Between 1646 and 1660, thousands of Jews in Poland and the west of the Russian Empire die at the hands of the Cossacks led by Bohdan Khmelnytsky. Eventually, the Ashkenazi4 community in Amsterdam grows larger than that of the Portuguese. Up until this very day, these two groups determine the face of the Jewish orthodox community in Amsterdam.

Before the outbreak of World War II, 10 percent of the population in Amsterdam is Jewish. Amsterdam has around 800,000 residents, therefore around 80,000 of them are Jewish. The Shoah, the persecution of the Jews in World War II decimates the Jewish community; only 20 percent, around 15,000, survive. This huge gap is still noticeable today. The monuments to Jewish history do not outweigh the lack of Jewish life in the city.

In the meantime, the second and third generation of Jews have picked up the thread and nowadays Amsterdam has a thriving Jewish community. There are different Jewish communities, from orthodox to very contemporary and modern. The Jewish community has its own educational organisations, health care and social work institutions.
The Jewish Historic Museum is at the centre of Jewish cultural life. Cultural festivals like the Jewish Music Festival are annual events. Various choirs sing Jewish liturgies and about daily life.
Het Nieuw Israëlitisch Weekblad (The New Israeli Weekly) (NIW) is a Jewish weekly newspaper, in which international news is reported alongside national news. The Jewish Broadcasting Corporation broadcasts radio and television programmes nationally.
The University of Amsterdam and Free University offer a range of Jewish studies. There are two important Jewish libraries in Amsterdam: Ets Haim-Livraria Montezinos, located in the Portuguese-Israeli congregation complex, and the Bibliotheca Rosenthaliana, which is affiliated to the University of Amsterdam. In south Amsterdam, you can find various Jewish shops and restaurants.

Find out more about Jewish Amsterdam

The combination of modern Jewish life and monuments to the pre-war Jewish community makes Amsterdam especially interesting to visit. Do a guided tour with Jeanette Loeb. She guarantees you an interesting experience of Jewish Amsterdam.